Today, for the first time, we bring you our analysis of the HLTV CS:GO World Ranking. Each week, we will try to delve into the secrets of the world's TOP50 and present to you the conclusions drawn by our experts.

Ranking players and teams are the domain of every competition, and it's no different for Counter-Strike. It's incredible just how importanta part of the game's ecosystem rankings have become. Their importance has been determined by tournament organizers, who have found in the available leaderboards the key to sending invites to the events they create. This started in 2015 with ESL, who, explaining the lack of an invitation for TSM at IEM Dubai in response to public dissatisfaction, published the source of their invitations. A few weeks later, they were joined by HLTV, which, after a year's break from publishing the last final subjective list, started a weekly publication of the ranking of the best teams in the world based on prepared algorithms. Over time, it became clear that the key was not universal. Some people were not happy with the way the points were allocated, and thus, today, we have at least 3 worldwide rankings for participation in top-level events:

Local rankings focus on national teams and influence smaller competitions such as Cybersport in Poland, draft5.gg in Brazil, or dust2.dk in Denmark. One thing that hasn't changed is that HLTV Ranking is the most renowned among gamers and gameplay observers, mainly due to the comprehensiveness of the data taken into account, the multitude of competitions covered and the site's significance in the esports scene. HLTV is the source of information about the quality of teams for the majority of the community.

How does the HLTV ranking work?

There is no simple answer to this: the formula has not been disclosed, and the way the data is presented does not fully explain relegations and promotions. What is known, however, is what factors mainly affect a team's placement:

- results in offline tournaments over the last three months

In a pandemic situation where all competition has moved online, the last element has changed significantly - before 2020, the online performance had a minimal impact, whereas today it affects every single factor. 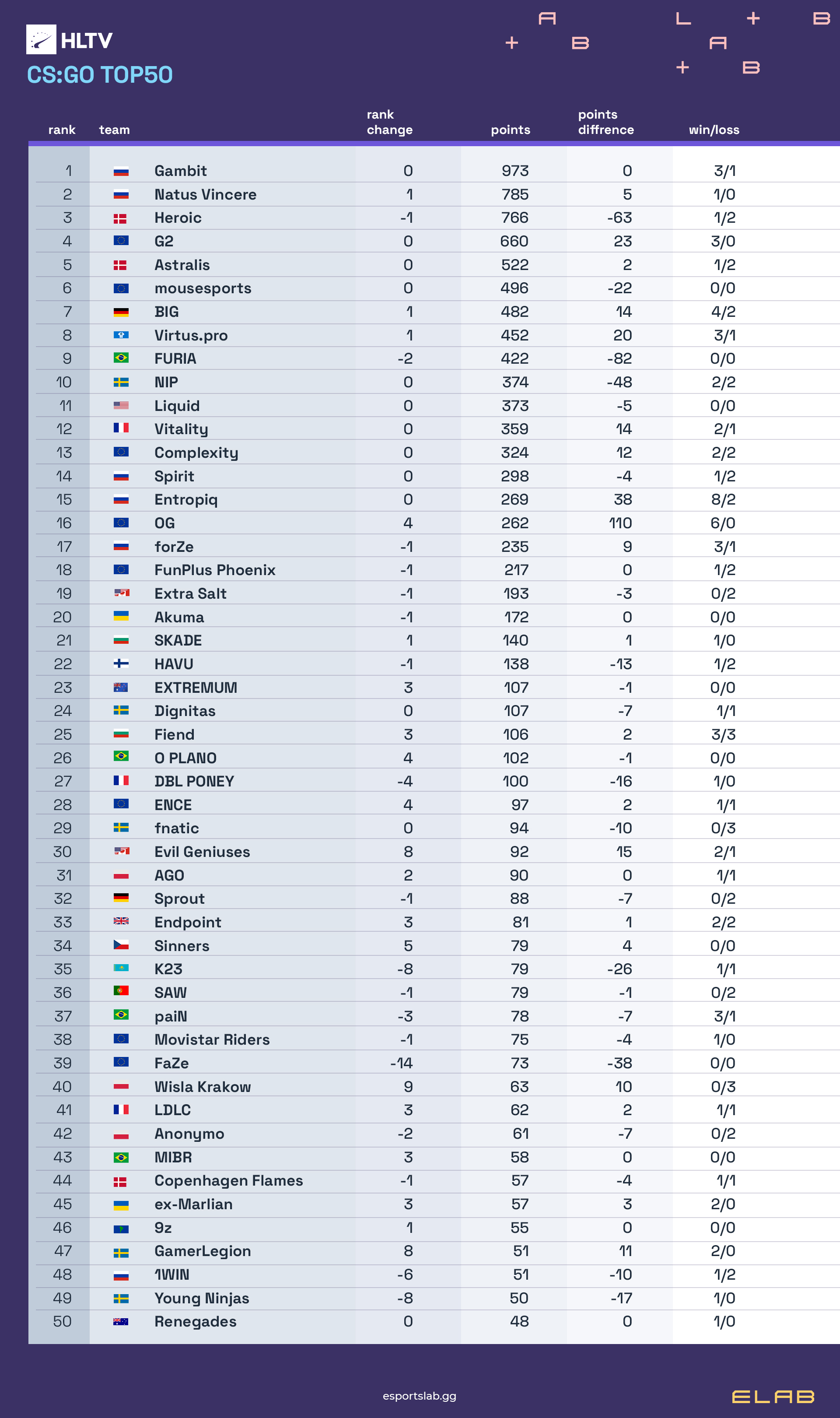 The biggest question has always been how to fairly assess the importance of local and continental competitions. Local, because within Europe, citizens of different countries have  various other opportunities or ease of playing matches on HLTV. Continental, because ever since the inception of the Minors system as a way to qualify for a Major, a controversially large number of spots have been guaranteed to the then clearly weaker regions. The problem has intensified now that there has been no way to contrast teams from different parts of the world for a long time. As a result, points and high rankings being pocketed by teams that excel in their respective regions but do not necessarily represent a similar level of play.

Why are we doing our analysis of the HLTV rankings?

We'd like to clarify any confusion about the basic premise of the rankings with our weekly look at the HLTV rankings.

The first week is just a teaser of our analysis. We have even more in-depth information about the top Counter-Strike teams planned for you in the coming weeks and months. We try to put a lot of emphasis on the most key data and statistics that most analysts ignore.

We are officially launching our @HLTVorg ranking analysis.
Each week, we will bring you our experts' perspective on the latest ranking update, along with interesting facts and detailed data. pic.twitter.com/RCg7lB698z

Through our weekly analysis, you will be able to delve deeper into the world of competitive CS:GO and gain a better understanding of the differences between the top 10 teams and the teams at the bottom of the rankings.

For Polish Counter-Strike fans on our social media channels, we will publish a separate graphic showing the rankings of the Polish teams. From week to week, you can follow the rise and fall of your favorite organizations and see how close they are to the top.