We decided to introduce you even deeper into the topic of Pro Skills Assessment and, using one of our original indicators, show you how our technology can be applied on the esports scene and a new perspective it brings to the analysis of the game at the highest level.

Pro Skills Assessment is a result of our cooperation with many coaches and professional players. Thanks to their experience and lessons learned from working at the highest level of competition, we created a tool dedicated to coaches and analysts. Pro Skills Assessment is designed to streamline their work, automate most processes and leave the analysis of data provided by our technology to the experts.

Thanks to Pro Skills Assessment technology, we began working with @Dr_Pepper_PL. Data provided by EsportsLab helped @neextrela pick the best players of the qualifiers. pic.twitter.com/CAfBZPHTgb

A perfect example of this is our cooperation with Dr Pepper Academy, which you could also read about on our Blog. Not that long ago we've completed the qualification stage, where we were able to collect performance data from all participants using our Pro Skills Assessment technology. The analysis of the information we provided was handled by Sebastian 'Neex' Trela at the Academy. His experience competing on the professional stage combined with our metrics allowed him to select the players with the most potential, who also came for testing to our Lab and took part in the next stage of the Dr Pepper Academy. In creating the Pro Skills Assessment, we focused heavily on filling in the gaps in the statistics used over the past few years in Counter-Strike. Our team identified a major problem in the analysis of players to date. Many metrics designed to evaluate a player individually are influenced by the team aspect of the most popular esports games. It's hard to objectively look at one player when his stats are often influenced by the behavior of his teammates. So we focused on individual metrics that are not affected by the team aspect of the game.

The second problem we want to solve with Pro Skills Assessment is enriching statistics with context. Most esports fans know exactly what it's like to go on Reddit or Twitter after a game lost by your favorite team. You see posts blaming the loss on the high death count of a support player in League of Legends, the low K/D of a Call of Duty player, or the low ADR of a Counter-Strike player. Many statistics in team games lack context. When working on the Pro Skills Assessment metrics, we decided not only to focus on a specific value but also to present the situation in which we obtained it.

To better illustrate the aspects of the Pro Skills Assessment that we write about in today's article, we decided to introduce you to one of the key indicators of our technology - spray control. It is likely one of the most essential skills in CS:GO. As the position of the bullets is not solely dictated by the player's aim, professional players need to learn to correct for weapon's recoil. Each weapon has a distinct, fixed recoil pattern that needs to be mastered. Knowing that pattern, you can compensate for it by moving your mouse in the opposite direction. Best riflers can mirror recoil patterns with extreme precision, giving them almost perfect control over the flight of every bullet. 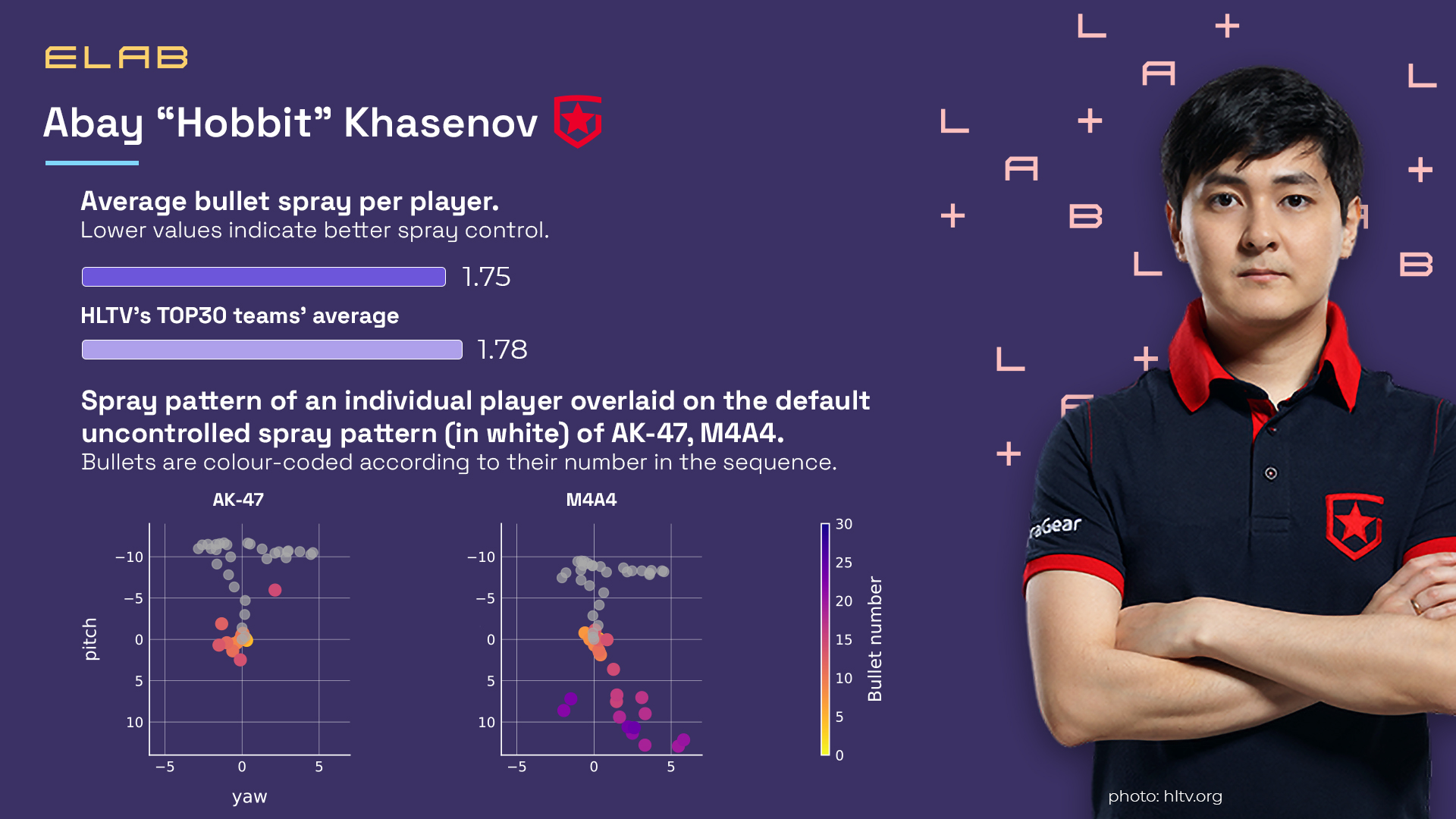 At ELAB, we have developed a spray control metric that compares your spraying pattern to the ideal one. We can break down your matches into individual weapon-fire sequences and find every single one of your sprays. Based on that data we can tell you how well you compensate for the weapon's recoil and where your spray still needs improvement.

In more detail, based on the position of your cross-hair and the weapon-specific recoil pattern, we calculate the trajectory of every one of your bullets. We then look at the distance between each of those bullets and the position of the first bullet that hit the target. To make sure that this distance can be calculated reliably, we only look at sprays that hit exactly 1 enemy player.

We aggregate that information to compute our final "bullet spray" metric, which quantifies the average deviation of your bullets from the first hit. Since our metric is distance-based, smaller numbers indicate bullets landing closer to one another. As such the smaller the number - the better! 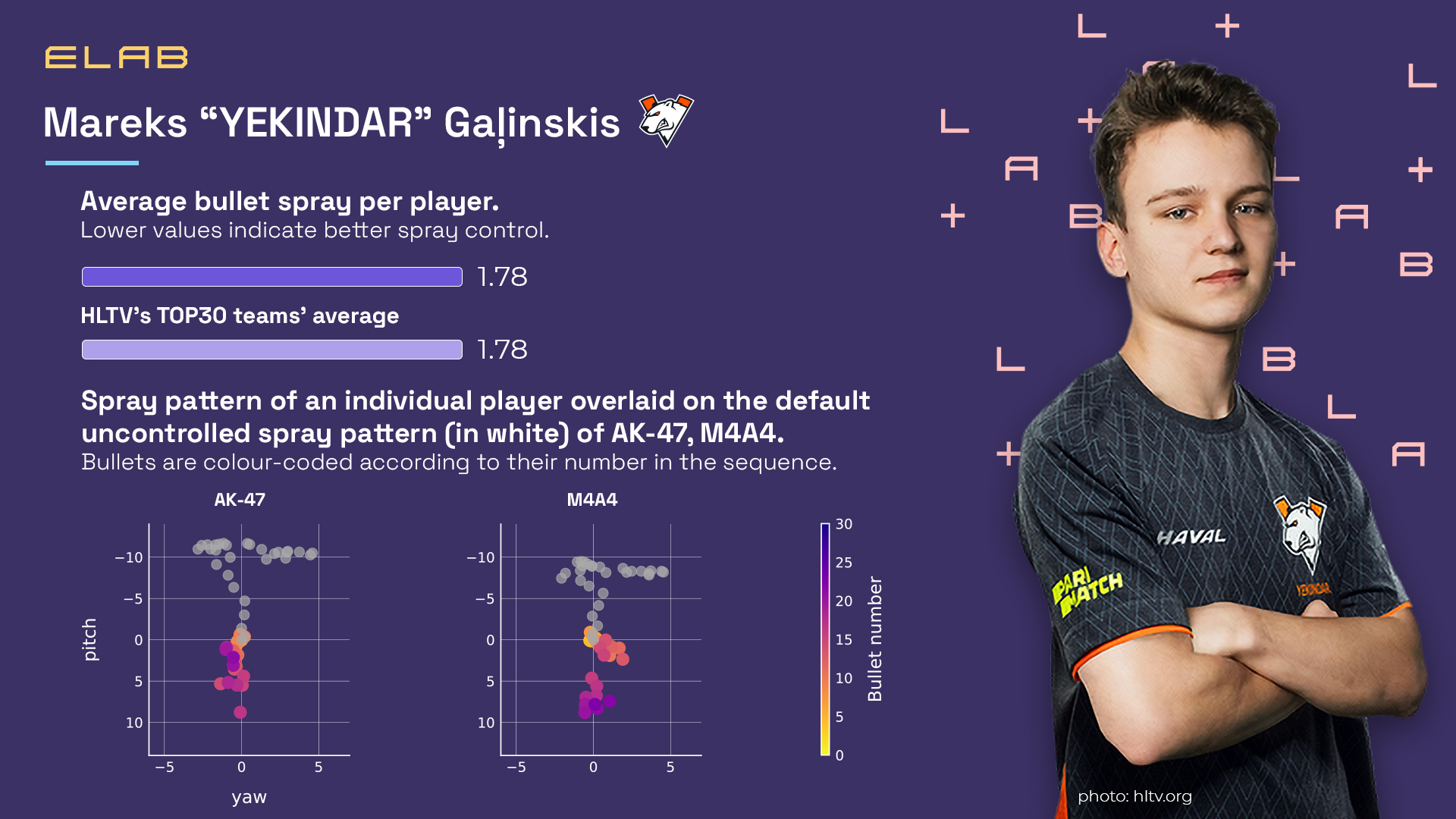 It is an indicator that is completely independent of the behavior of the player's teammates. Spray control is one of the most unique and difficult Counter-Strike mechanics to master. Unlike many other metrics used by CS experts today, spray control is completely player-dependent. There is a reason that one of the subjects of our analysis today is Magisk, a legend of excellent spray control. Viewers and experts alike were able to look at Magisk's form, assess his weapon control, and see skills in this aspect that very many players don't have. The Pro Skill Assessment metrics are designed to help analysts and coaches evaluate players in just this way - putting aside their achievements and the skills of their peers and focusing on pure individual skill.

Finally, since in CS:GO, your opponents are rarely standing still, a good spray control metric should account for the movement of your target. In ELAB, we translate the motion of your enemy into your weapon's coordinate space and remove the contribution of that motion from your spraying pattern. In other words, we turn the moving targets into stationary ones. This allows us to tell you how well you control your spray when your enemy is moving to the right, to the left, or crouching.

For the spray control indicator, the context of the situation is moving while shooting. Any Counter-Strike veteran knows full well that it only takes one step while firing a round for some of the bullets to land far from your target. It's very easy for experienced players to master recoil when you're standing still on a practice map and your target is a large, stationary wall. During a match, context matters much more and plays a huge role when analyzing the spray control indicator. 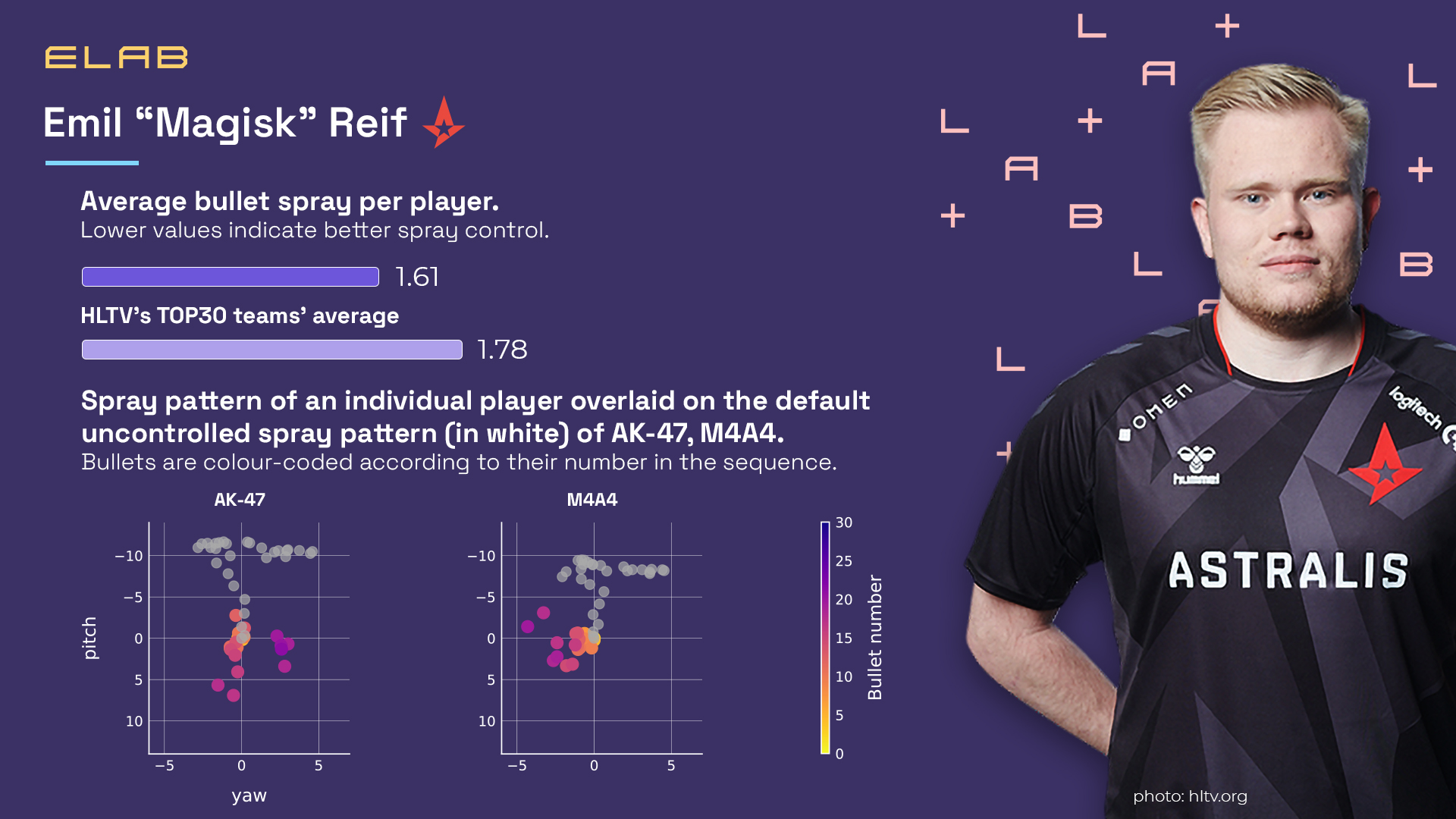 With the direction our team has taken during the development of the Pro Skills Assessment, we are confident that we can not only help analysts and coaches with their work but also offer them a perspective on a player's individual skills that they won't get from any other source. Our proprietary metrics are also a step towards changing the public's perspective on statistics in team games.

Pro Skills Assessment is a technology in constant development that will highly benefit from a collaboration with even more teams and organizations. We encourage any team that would like to gain new insights into the individual skills of their players to contact us.